About the Hydrometeorological Project on Borongaj 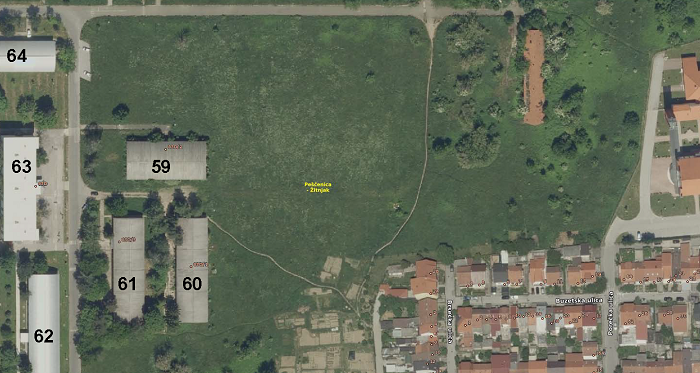 The decision of the Government of the Republic of Croatia of 2 November 2006 was to make the former barracks in Borongaj a Science and University Campus (as it is called in the Ministry of Science and Education), i.e. a Student Campus (as it is called in the urban plans of the City of Zagreb: from 2012, 2013. and 2019), i.e. the University Campus (as it is called in the Development Strategy of the Zagreb Urban Agglomeration, pages 145–146, and on signposts on city roads). So, it should be a space in which the activities necessary for the life, stay and study of students take place: scientific-teaching, scientific-research, accommodation, food, service, sports and recreational facilities. If the Croatian Government remains committed to that decision, then it should be striving to ensure exclusively university facilities on the Campus. Introduction of heterogeneous content that is not in the function of the Campus dilutes and permanently prevents the establishment and building a Campus.

In 2016, DHMZ launched the “Project of Modernization of The Croatian Meteorological and Hydrological Service - Phase I” and requested land from at that time State Office for State Property Management to build a new building (source). Nobody informed Croatian Studies about that request. 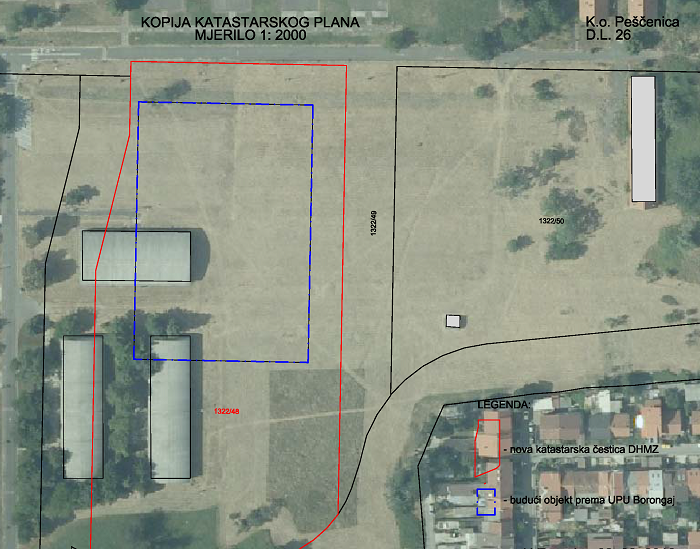 Available documentation indicates that the western part of the new DHMZ building would be built on the ruins of half of building 59 (Sports Hall). Would the demolition of that building be a contribution to resolving the burning issue on the Borongaj Campus? According to a survey conducted in 2014, students at the Borongaj Campus miss sports facilities the most (76.4%), followed by shops (73.9%), bakeries (73.1%) and dormitories (71.1%). 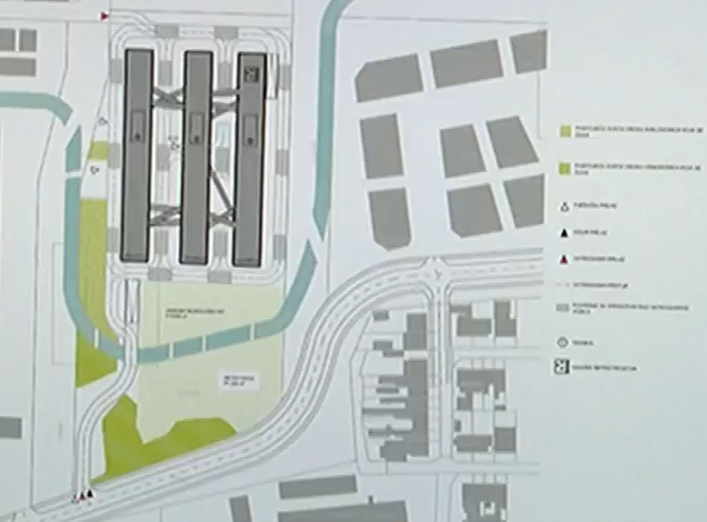 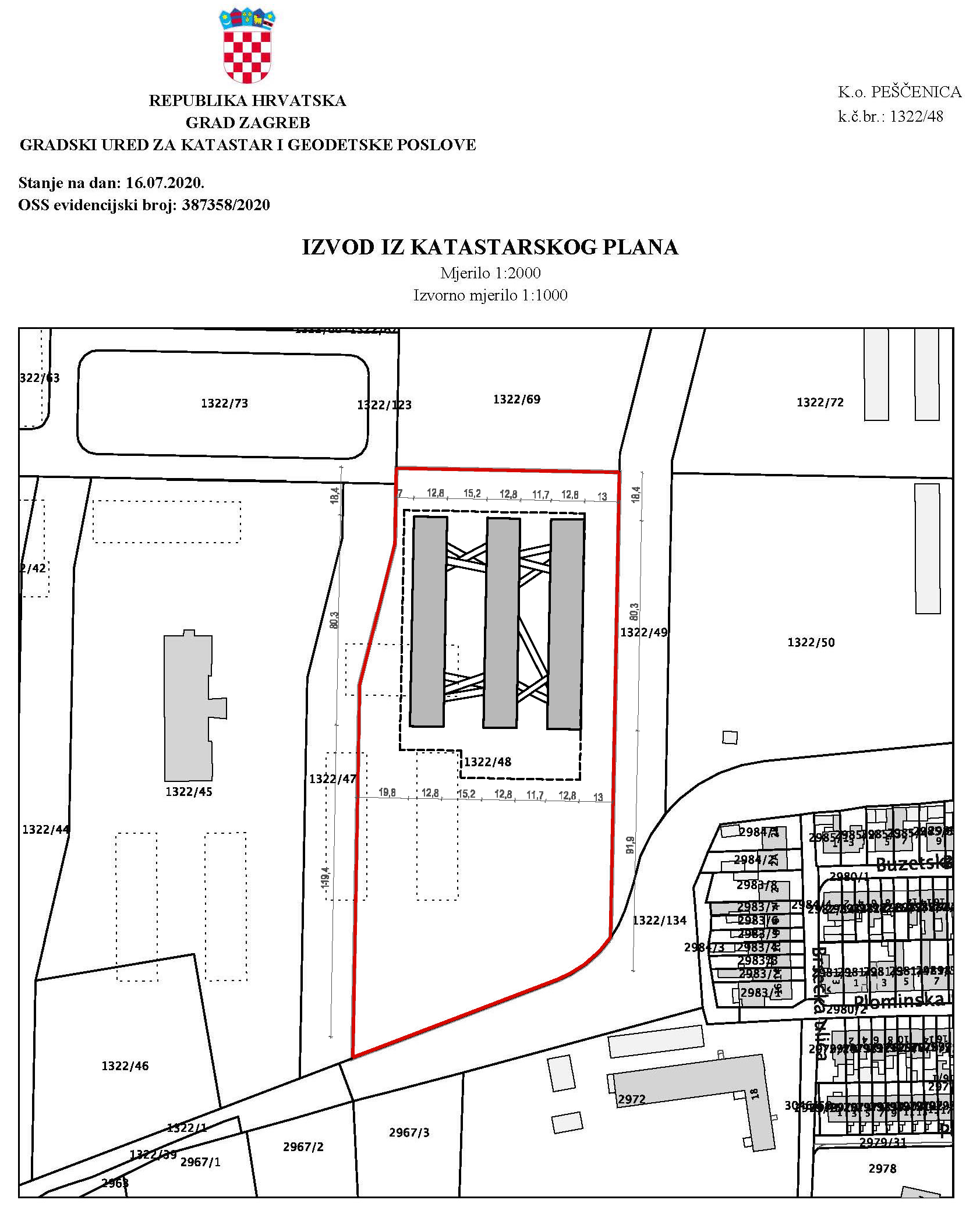 Ground plan of the existing buildings 59, 60 and 61 (intermittent) and the new three-part DMHZ building (gray) according to the cadastral excerpt of 16 July 2020. Source: DHMZ Architectural Project of June 2021, page 159. 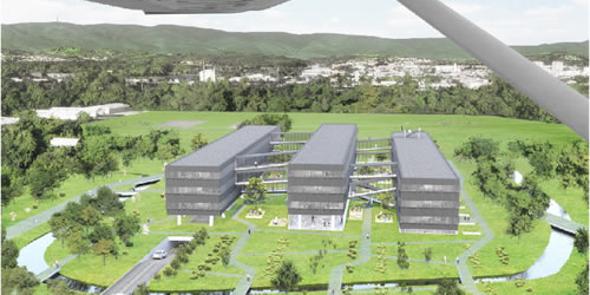 Building 60, although 6.5 million kunas was invested in it in 2019, is planned to be demolished to build the entrance to the underground garage of the new DHMZ complex from the southwest (source of illustration). This model shows streams and bridges around the building, and on the left, that neither the main building of the Faculty of Croatian Studies nor the Library building is expected to remain.

On 1 December 2021, the Faculty Council of the Faculty of Croatian Studies unanimously issued an Appeal Against the Demolition of Buildings 59, 60 and 61 on the Borongaj Campus (Croatian) on the harmfulness and inadmissibility of the demolition of these buildings.

What, when and why is intended to be demolished?

From the available documentation and from the statements that were given by the DHMZ director general, about the demolition of buildings 59, 60 and 61 on the Borongaj Campus, the following contradictions and inconsistencies can be found.

Version 1 (1 minus 2): only building 59 is demolished, buildings 60 and 61 remain intact. "The contract allocated them a property of 19,388 square meters. There are three buildings on it, two of which are intended to be retained and one to be removed. ” (Telegram.hr, 7 October 2021); "There are three properties on the allotted land. One of them is already being used by DHMZ, after the renovation, one is planned to be demolished according to the contract, and one building is used partly by the Faculty of Law and Croatian Studies. Ivančan-Picek emphasizes that this building does not bother them at all. On the contrary, the agreement between DHMZ and the State clearly states that DHMZ is aware that one building on the land is used by the Faculty of Law and Croatian Studies and that they do not oppose it. “ (Telegram.hr, 24 October 2021)

Version 2 (1 plus 2): before starting the construction work on the new DHMZ building, building 59 is demolished, and buildings 60 and 61 are demolished when the new complex is built, and before obtaining a use permit for it. This was stated by the Director General of DHMZ, Mrs. Branka Ivančan-Picek. PhD, at the meeting in the Aula Magna of the Faculty of Croatian Studies on 19 October 2021, then during the on-site inspection conducted by the Ministry of Physical Planning, Construction and State Assets on 24 November 2021 as well as in a live broadcast S mjesta u eter (From place to air on) on Radio Sljeme on 3 December 2021 when she said: "We do not mind the existing two buildings. Only the first one is planned for the student gym. We do not see that we will build our future on the hangars of the former Jugoslav Army on Campus. Only this northern building should be demolished before construction begins, as it would interfere with construction work. However, the other two buildings can remain on the plot until the construction of the new building is finalized and until the moment of applying for a use permit for the new building. Therefore, we still have not secured financing for this project, but when we do there will be a public procurement for construction works. When all this is done, in the most optimistic period it should be in maybe four or five years. "

Version 4 ("flattened land"): buildings 59, 60 and 61 are demolished before the start of construction. The Construction Project – a project for the removal of the existing buildings to build a new DHMZ building from 17 February 2021 on page 14 reads: “Existing buildings are single-story buildings. Of the three buildings that are being removed, two buildings are identical (type 1) and have dimensions of 56.5 x 16.5 m and are 7.5 m high. The third building (type 2) measures 21 x 42.5 m and is 7.5 m high. The load-bearing structure of all three buildings consists of reinforced concrete columns and beams and reinforced concrete roof grilles with steel tension. The foundation structure consists of single foundations under the pillars connected by foundation beams. The roof of the building is salonite panels laid on a secondary prefabricated structure that relies on reinforced concrete roof grilles. Facade walls are built with openings (wooden windows and doors) with a plastered facade. The building has gas installation, electrical, plumbing and sewerage installations and city connections. It is planned to remove all existing elements." (prepared by: Radionica statike doo, Andrije Kačića Miošića 22, 10000 Zagreb, construction designer: Branko Galić, MS (G 3065), collaborators: Filip Cvetko, MS, Vlaho Miljanović, MS, and Igor Pokos, BS).

The demolition of all three buildings, immediately, is also planned by the Building Permit No. 349/2021 issued by the City of Zagreb to the DHMZ on 18 October 2021. 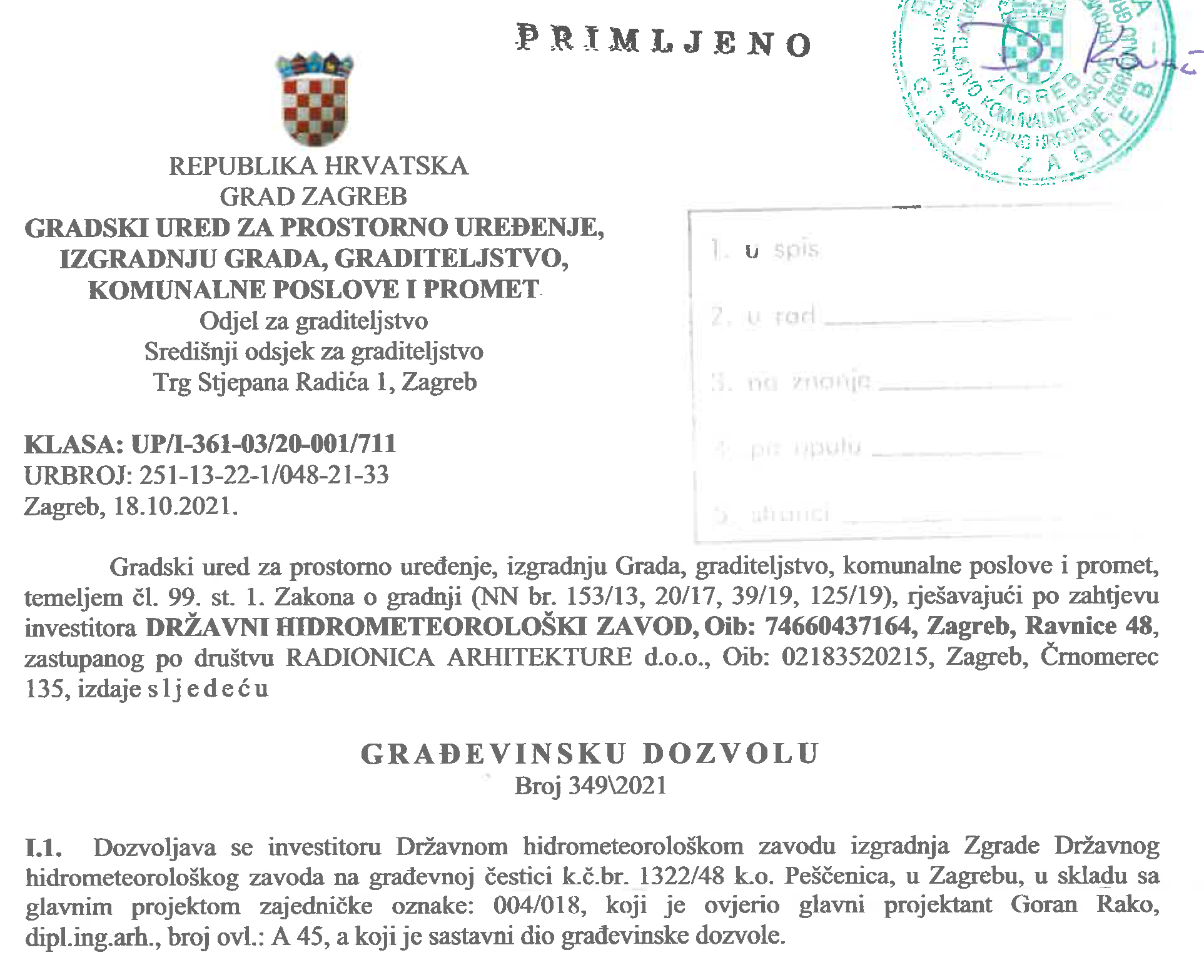 In the first-instance Building Permit No. 349/2021 of 18 October 2021, on page 3, point V., the City of Zagreb determined: "Before the start of construction, it is necessary to remove the buildings built on the subject plot".

The Croatian Meteorological and Hydrological Service received the consent of the Republic of Croatia to demolish building 59 by the Agreement with the Ministry of Physical Planning, Construction and State Assets of 27 April 2021, but this agreement is null and void as it is contrary to coercive regulations in force at the time: Croatian Civil Obligations Act, Croatian Act on State Assets Management and the Regulation on Standard and Criteria for Allocation of Real Estate for the Needs of State Administration Bodies or Other Bodies of Users of the State Budget and Other Persons. DHMZ did not submit a reasoned request for the allocation of real estate for use. No assessment of the market value of the property has been conducted. The decision on allocation for use was not made by the competent body. There is no reasoned request from DHMZ to explain the basis for allocating this property for use. DHMZ did not clarify why this property is the most suitable for performing its activities, especially if we assume that the buildings on it are already used by the constituents of the University of Zagreb. The area of ​​the real estate provided for use is not proportional to the needs of DHMZ as a user.

DHMZ did not obtain the consent of the Republic of Croatia, the owner of the land and buildings 60 and 61, to demolish those buildings.

Therefore, there are no claims that buildings 61 (lecture halls, cabinets and library) and 60 (in which more than 6.5 million kunas were invested in 2019) do not interfere with the DHMZ construction project. According to the building permit, the precondition for the start of construction is the demolition of the existing buildings 59, 60 and 61, so in case the appeal against this permit is rejected, the demolition of these buildings can be expected next year. The Faculty of Croatian Studies could lose four lecture halls and cabinets for nine employees, all students on Campus could be left without a building for a sports hall, and DHMZ without a building that it renovated only two years ago.